The 5th World Tourism Forum Lucerne has closed in a spirit of optimism at the end of the inspiring two-day event in the central Swiss city, attended by 500 participants connected with the international travel and tourism industry. The overriding opinion amongst participants is that whilst there are significant challenges to overcome, the industry is adapting to embrace a future full of opportunity.

In his keynote speech, Rasoul Jalali (General Manager Uber) explained how the Uber app, now used in 500 cities, has transformed urban travel. He presented the numerous innovations Uber has introduced, including shared taxi travel and the ability to ride on demand any time of day, and how Uber analyses the mass of data it accrues. Uber is also testing out driverless cars in Pittsburgh, U.S. “Driving by yourself may remain a recreational activity, but driving from A to B will not. Driverless cars will be the future.”

There was much focus during the Forum about attracting and retaining talent. At an aviation CEO roundtable featuring Rob Gurney (CEO Oneworld), Paul Steele (Senior Vice President IATA), Nazim Samadov (Commercial and Marketing Director Azerbaijan Airlines) and Michael Kerkloh (President and CEO Munich Airport), the need to attract more women into the industry, a greater ethnicity pool at higher levels, and finding enough people in a time when the aviation industry is growing massively were discussed.

Bestselling author Jason Fox (Head of The Cleverness) conducted a World Café, where he invigorated debate by encouraging the room to form small diverse groups and connect and exchange ideas.

Amongst the impressive array of absorbing speakers on the second day was Ann Sherry (Executive Chairman Carnival Australia) with a keynote speech entitled ‘Cruise Industry: Hype or Strategy?’. Of course, the industry’s best laid plans are worth nothing if they can’t attract investment, and John Perrottet (Senior Tourism Specialist World Bank) illuminated the audience with new models for financing tourism development.

In his interview with Swiss TV presenter Urs Gredig, Jon Erni (Director Public Sector Microsoft) urged tourism companies to embrace the growing number of online tools to find and retain customers, and to welcome a disruption of the existing tourism model.

The secrets of how Switzerland stays relevant in an ever-competitive marketplace were unveiled in an absorbing talk by Jürg Schmid (CEO Switzerland Tourism), while the tourism challenges of another small country, St Lucia, were explained by no other than the country’s Prime Minister, Allan Chastanet.
This year saw the first-ever Start-up Innovation Camp, and in total 170 young companies from 50 countries submitted their business models. Over the two days of the Forum, representatives from the four most promising companies pitched their projects, including Paras Loomba of Global Himalayan Expedition, India, and Netherlander Michael Ros. The latter presented a humorous bid to usurp hotel booking giants like booking.com and expedia.com with his member-based Bidroom, which charges no commission to hotels. The four companies were honoured with the "Start-Up Innovation Award 2017" endowed with prize money of CHF 20,000, and will receive professional coaching over the next two years.

“500 participants from 75 countries this year – isn’t that fantastic?”, said Martin Barth (President & CEO World Tourism Forum Lucerne). “Our growing number of participants coupled with the highest level of debate from so many key players in the industry, and our increasing international recognition in the travel industry’s calendar, underlines that each time the Forum is held it very much goes from strength to strength.”

Photos can be downloaded here: http://wtfl2017.wtflucerne.org/photogallery2017 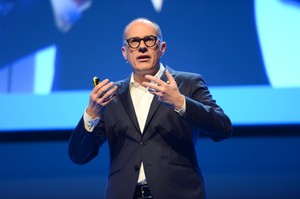