The Switzerland-based World Tourism Forum Lucerne is to expand its international orientation at two key events in China in 2016 – the "World Tourism Development Convention" in Beijing in May followed by the "WTFL Innovation Day China" in September.

Launched in Switzerland in 2009 and since staged every two years, the World Tourism Forum Lucerne has increasingly devoted its attention to international orientation. From 2016, the focus will be concentrated strongly on China.

Last month, talks have been taking place in Beijing between Martin Barth (General Manager of the World Tourism Forum Lucerne) and the Chinese Tourism Minister Li Jinzao. At the meeting the intention of working together very closely was confirmed officially. Martin Barth was also officially named a member of the Advisory Board of Reform & Development of the China Tourism Industry.

Minister Li Jinzao says: "With its international orientation and focus on priority topics, the World Tourism Forum Lucerne is on the right track. Talent management, innovation and sustainable development – these in particular are of paramount importance in our industry". And Martin Barth adds: "The Minister and I share a clear conviction that tourism is one of the branches most closely linked with other industries – and that it needs to be viewed in a wider context. Together we have come up with the concept of "Tourism+". The joint endeavours over the coming year will herald the start of a long and close cooperation, including the exchange of information and know-how and the regular joint staging of events at international level.

23/24 September 2016 will see the staging of "WTFL Innovation Day China" in a representative tourism region of the country (still to be announced) and for which the China National Tourism Administration has already assured its fullest support. Future cooperation between World Tourism Forum Lucerne and China is already the subject of in-depth discussion with other Chinese partners, strategic regions and authorities. 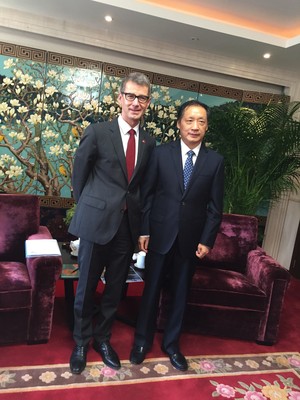