By Swiss Flyer in the footsteps of Che Guevara

More than 60 years ago the young Argentinian revolutionary Ernesto Che Guevara travelled thousands of kilometres through South America on a battered motorbike. Now an award-winning photographer is doing the same on a state-of-the-art e-bike – made in Switzerland.

Swiss adventurer, photographer and Latin America expert Luca Zanetti calls it his "E-Bike Diaries" – the story of a six-month expedition through seven South American countries. It's a journey through Chile, Argentina, Bolivia, Peru, Ecuador, Colombia and Venezuela, inspired by the iconic Che Guevara's travels in 1952. Zanetti's aim is to depict vividly via videos, texts and photos a more modern but sustainable form of travel over the 8000-kilometre expedition.

Che Guevara's travels – recounted in his "Motorcycle Diaries" – took him from Argentina to Venezuela on a stuttering single-cylinder Norton motorcycle dating from 1939 and which he called "La Poderosa" (The Mighty One).  In stark contemporary contrast, Luca Zanetti's ambitious odyssey is by a state-of-the-art premium e-bike from the TS Flyer series manufactured by Biketec of Switzerland.

Six companions and lots of baggage
Zanetti's journey began in Santiago de Chile in mid-December, since when he has reached Mendoza (Argentine). He is accompanied on various sections of the expedition by one of four photographers, a journalist or an ecologist. As with Guevara, Zanetti too is inspired by revolutionary thoughts – but in this case a revolution leading to the sustainable and health-enhancing use of natural resources, and focussing in particular on means of mobility.

In the words of the 45-year-old photographer: "The e-bike – apart from being one of the coolest inventions of the age – is an ideological choice. It reminds us of today's crucial struggle, for both men and nature and not between man and nature.  It stands for the creation of a more energy efficient and less resource intense economy. It is in this spirit that we'll name our e-bikes "Poderosa I" and "Poderosa II"

Zanetti's ambitious project is supported by Biketec of Switzerland in the form of the two e-bikes for him and his travelling companions. Both machines first underwent rigorous testing in the Swiss Alps – each complete with 60 kilos of baggage. Luca Zanetti's "E-bike Diaries" comprise a wealth of images and impressions of his 8000-kilometre journey through South America. They are to be found under this link. 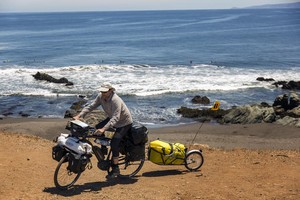 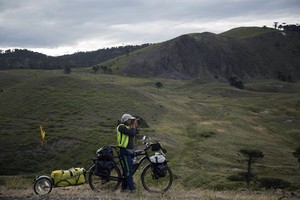